How can I find the angle by making a drawing?

I now want to find the angle between Capella and Aldebaran by making a drawing. 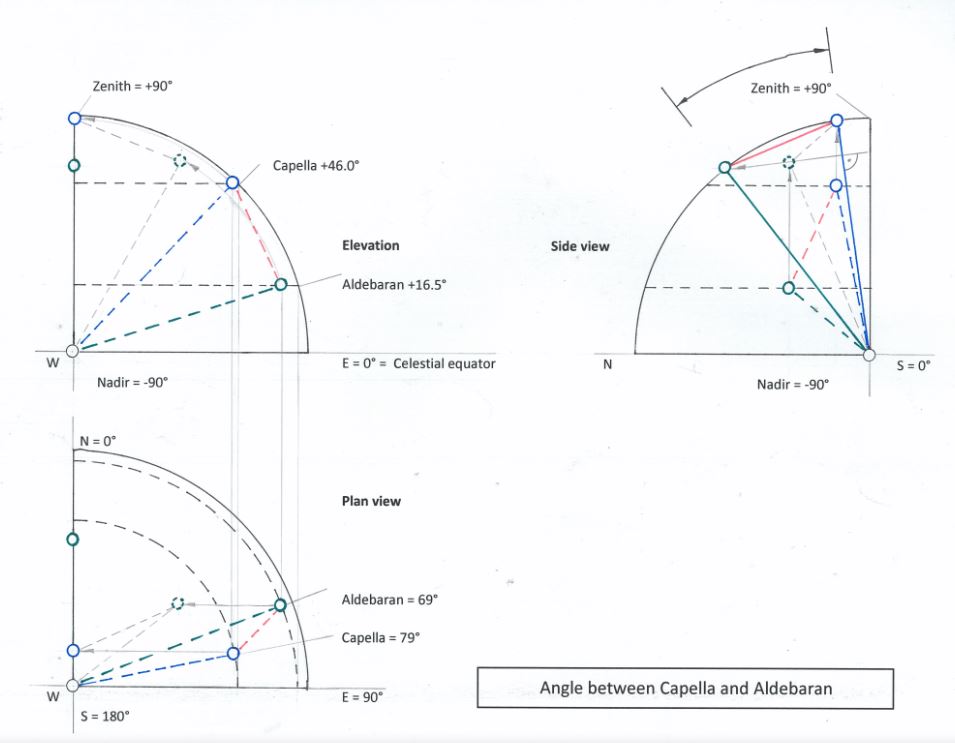 Astronomers describe the positions of objects in the sky by imagining that they are all at the same distance from the Earth, on the surface of an imaginary globe called the celestial sphere.

And I do not have to draw my drawing to scale, because it is only about angles and the radius in this imaginary globe can in any case be of any dimension.

So of this eighth of my globe I draw a plan and an elevation and a side elevation.

All seizes of the angles of these three triangles are not the real seizes, because none of these triangles is in the same plane as the picture is.

So I now want to find the real seizes of the angles.

I now tilt the triangle in the "Elevation" so that the line between the centre and Capella is in the vertical plane. The axis around which this tilting is done is the axis going from south to the centre and to north.

With this line, the blue one, from the centre to Capella I now have the real length of this line, but the rest of the triangle, the two dotted grey lines, are still not the real length, because this triangle is not in the plane of the "Side view."

This was the first tilting and now comes the second, and I do this in the "Side view."

Now I tilt the rest of this triangle around the blue line between the centre and Capella and I do this by erecting a perpendicular to the blue line. And this perpedicular goes through Aldebaran, the little circle shown with a dotted line in green ink.

And where the perpendicular intersects with the circle, there is the final position of Aldebaran.

So this triangle is now the triangle that shows the correct angles and therefore the lengths of the three sides of the triangle are in right relationship to each other.

And when we measure the angle then we get 30o.

So this is an alternative method to determine the distance between two objects in the sky. It has the advantage that one really gets a feeling for the location of the stars in the celestial sphere.

In the "Plan view" for instance one can see the orbits on which the two stars move. The smaller the orbit gets the closer the star is to the axis between Zenith and Nadir. Looking at a time-exposure photograph one can nicely see these star trails. And as the celestial sphere is similar to the terrestrial sphere, these circles correspond to the degrees of latitude or parallels, which mark positions on the surface of the earth.

Now this system for the celestial sphere makes more sense than that for the terrestrial sphere, because the system for the terrestrial sphere should be the same as that of the celestial sphere. Parting the terrestrial sphere in two halves, in east and west, should have been avoided, because now a second detail is necessary to describe a position, the sign "plus" or "minus". And that is not the only problem, the other is that their system becomes confusing when the position of a place is discussed that is on the other side of the globe, far away from London, then a place nearby might be to the east, but is in the far west of their system. So they should have London, or any other place they want to choose, as 0o and also as 360o. So the system chosen for the celestial sphere very nicely shows how to do something like this. To divide the world into east and west has some advantages, but also disadvantages, for the designation east or west should relate to the present location only. The old system was to speak of morning and evening, and that could be applied to any place wherever one was.

If they had taken 180o for London, then the Date Line could also have been there, where it is today. And then one could still devide the world in east and west, because that does not really depend on the system.

For the position of 0o or 360o here some quotes:

The first point of Aries
In ancient Greek times, over 2,000 years ago, the vernal equinox - the point at which the ecliptic crosses the celestial equator - lay near the border of Aries and Piscies.

Right ascension is the angle of the object measured from the celestial meridian, which intersects the celestial equator at the first point of Aries.

First point of Aries (vernal equinox point) is the origin for right-ascension measurements.

So that System was chosen for a good reason. That was for the celestial sphere. Now for the terrestrial sphere London was chosen. They picked London, because that was the capital of their country and that was where they were. Others did the same. The French for example picked Paris. So the English system became the generally accepted one.

Now the need to do this determining of the angle between two objects in the sky arises, when one for example sees two stars in the sky and wants to check if they are really the ones, one thinks they are.

One advantage of this graphic solution is that I find the angle of the triangle so, that I can picture the matter to myself, while with a determining by calculation I first have to believe in the correctness of the formula.

This is the end of "Astronomical question and answer 281"
To the German version of this chapter: Astronomische Frage und Antwort 281