But in the picture to answer 207 it is the other way round. Why?

Because you may be on the southern hemisphere?

What has that then to do with it?

Perhaps they have turned the picture 180 degrees. Probably not by 90 degrees, for then it would be too steep for being so far away from the equator. Let us have a look how it looks then, when we turn it 180 degrees: 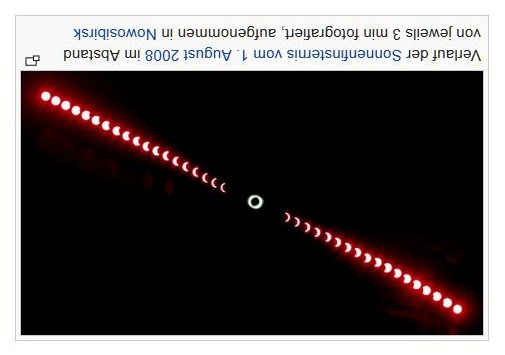 But that looks practically the same.

Perhaps the picture is reversed; that the course starts to the left at the bottom and goes up to the top and to the right, so that it was therefore in the morning.

There is really nothing wrong with the picture. The problem after all only arose as a result that the question is misleading; that the question puts forward a wrong assertion. In the picture the moon is before the sun, until the maximal cover, and after that behind the sun, because the course is from the left to the right.

One could also think the picture is not from Novosibirsk, but from a place south of the equator; and that the course starts on the right and then proceeds to the left upwards, and is in the morning. But an eclipse of the sun always refers to a very small part of the surface of the earth only and indeed was at that time exactly only in Novosibirsk and surroundings. The cone shadow of the moon only has a diameter of maximal about 200 km.

The cone shadow of the moon wanders with a speed of about 28 km per minute over the surface of the earth (at the equator).

When the cone shadow has a diameter of 200 km and a speed of 28 km/minute, then a camera like the one in Novosibirsk is 7 minutes in the cone shadow. And when than every 3 minutes a picture is taken, then these are 2 pictures.

This is the end of "Astronomical question and answer 211"
To the German version of this chapter: Astronomische Frage und Antwort 211