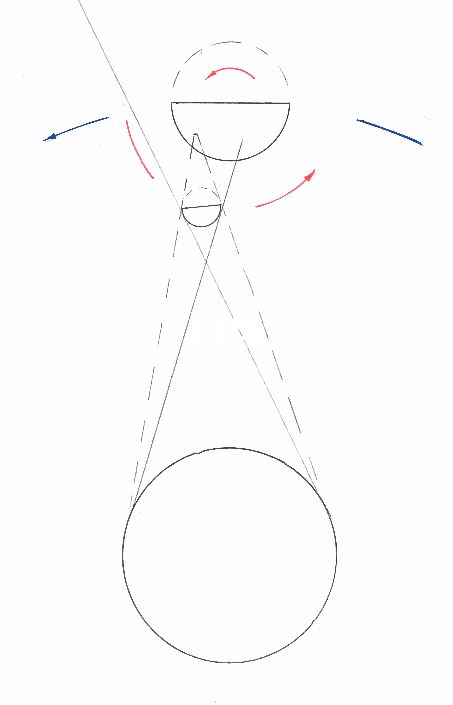 This diagram shows a solar eclipse.

We want to use an example, to discuss details of an eclipse. Further down are data of this example of a solar eclipse as a demonstration. You can have a look at it, but we actually want to only discuss interesting details of this eclipse.

This solar eclipse was seen in the USA. It started in the west und moved right across that country to the east. The following pictures show this: 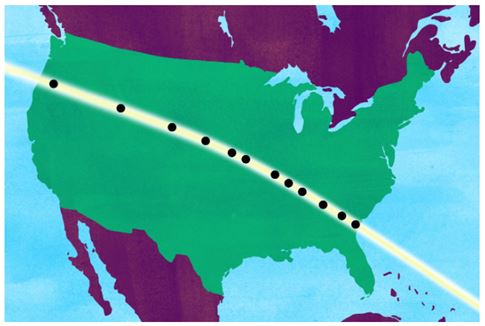 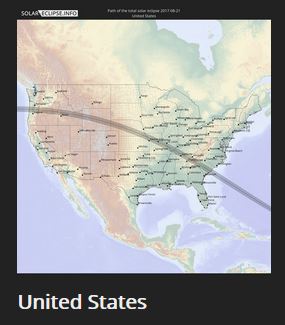 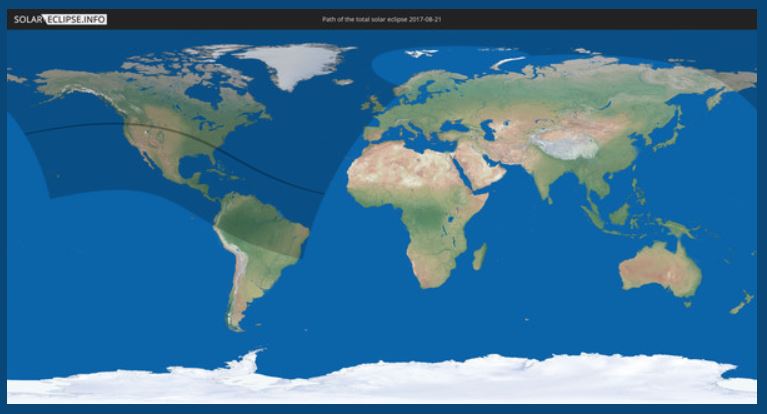 Now these pictures show that the eclipse did not stop at the east coast, but carried on and moved over the Atlantic.

The high point is right in the middle of the course of the eclipse. It is the time when astronomical tables show the time of the new moon.

The third picture shows that the middle of the path of the eclipse is somewhere west of the east coast and the table below confirms this.

In our example we can see this:

The second speed, which must be taken into account, is the speed of surface of the earth around the axis of the earth. It is 1670 km/h – at the equator.

A comparison of these speeds look then like this:

Now the speed of the shadow changes according to the distance from the equator, but it also changes the more it deviates from following a parallel. And that is noticeable in the eastern part of the USA where the course of the shadow is more inclined than in the western part. But then close to the eastern coast it comes again less inclined, and consequently the speed increases.

Now coming back to the first table, the table called "Solar eclipse August 21, 2017," and there looking at column 28, we have the times, when the eclipse occurred at the different places, at their respective times, according to their time zone. And in the next column, column 29 we have the Greenwich times, which give us a better idea, about the course of the eclipse - time wise. Now in column 27 we have the time of the new moon and that is always and everywhere the same time: 19:30 Greenwich time. And that is because the exact time of the new moon does not depend on a certain place on the surface of the earth, but when the theoretical line from the centre of the sun via the centre of the moon goes right through the axis of the earth. And that happens irrespective of any place. When we now keep this time of 19:30 in mind and go down column 29, then we see that the times given in column 29 increase from place to place and come closer and closer to the time of 19:30. And in the place called Nashville in Tennessee we have the time 19:27, therefore 3 minutes before 19:30, and in the place called Nottely Lake in Georgia we have 19:35, therefore 5 minutes after 19:30. So between these two places there was new moon. And there was then also the high point of the solar eclipse and therefore also the centre of the course of eclipse, space wise.

This is the end of "2.18 Solar Eclipse"
To the German version of this chapter: 2.18 Sonnenfinsternis