28.002 The superior sense performances of animals

Der Standard
The seismological senses of the goats, 09.12.2017
derstandard.at, The superior sense performances of animals

The seismological senses of the goats 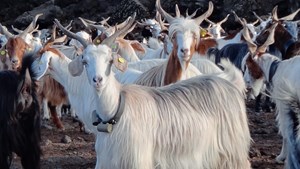 To investigate the sensory for the volcano activities of goats, the researchers have equipped the goats, which graze on the slopes of the Etna in Sicily, with robust senders at their collar (see photo). These record GPS positions and movement profiles of the goats.

"When I present my idea, I sometimes get funny looks", says Martin Wikelski, director of the Max Planck Institute for Ornithology in Radolfzell in Baden-Württemberg. Animal owners indeed like to rely on the feel of their four-legged friends, but in science the trust in animal performance is rather taboo.

Unjustly finds Wikelski, who is convinced that man should use the superior sense performances of animals: "For their better measuring systems and superior information processing animals can make predictions, which man-made, technical sensory is not able to do", said the Biologist. In fact earthquakes cannot be predicted up to now and volcano eruptions only partly.

Many stories have grown up around such "sixth sense" of animals: Elephants, which flee from a tsunami into the interior; snakes, which awake from their hibernation before an earthquake. But Wikelski is the first, who has also investigated the phenomenon scientifically. The volcano Etna in Sicily was chosen, since it is continuously active and goats are grazing on its slopes all year round. The researchers equipped them with robust miniature senders, which were fixed to a collar. For two years the senders constantly recorded the exact GPS position and movement profile of the goats. "Today we know very well, what so happens in the life of a goat", says Wikelski.

There were seven larger eruptions in the investigation period. With the comparison of the goat data, therefore the movement profiles, with the volcano activity the researchers recognized a clear connection: Several hours before a volcano eruption the animals became unusually restless: They ran to and fro and fled under bushes and trees.

"We could reliably predict the eruptions – afterwards - with the help of the goad behaviour", said Wikelski. Smaller eruptions do not influence the behaviour of the goads.

How the goats perceive a forthcoming eruption, the researchers still do not know. They possibly perceive electrified ions in the air with their body hair or smell changed gas emissions.

Their behaviour however can be explained: "Animals fear the uncertainty, and that is advantageous", says Wikelski. Anxious goats, which flee under a tree, survive therefore more often than such, which carry on grazing and are struck dead by a lava lump.

Not only goats get wind of such nature events. "When there has been a larger earthquake in Switzerland, the Swiss earthquake service often gets notices of animal owners that the animals had felt it before", says Donat Fäh, seismologist at the Swiss Technical High School Zürich (ETH). "It could really be, but is not checkable afterwards. Animals have far better senses at their disposal than men. Whether one can implement such abilities into a warning system, that is however questionable."

The greatest hurdle the seismologist sees in precise predictions: "In China one has started a system in the 1970ies, where for example farmers have observed the behaviour of their animals. That has once worked out all right and then once failed." The problem: How does one know, when one must warn, without triggering too many wrong alarms? Animals for example also act crazy with a forest fire. "And a wrong alarm can also cause damage", says Fäh.

One would therefore have to show that every alarm is justified, and then predict enough precisely the location, the time and the extent of an event. And first one should let the goats start against the modern technic – what Wikelski has planned: "But the financing of such studies proves to be difficult in our technically dependent society."

And still the small amount of data should considerably increase in the coming years: In spring 2018 the project "International Cooperation for Animal Research Using Space" (Icarus)" starts, which Wikelsky has brought into being and which will make it possible for researchers worldwide, to observe different animal species with the help of a satellite system.

"That is a new era of behaviour research", says Wikelski. Earlier behaviour researchers only saw tiny parts of an animal life – and that mostly only under great efforts -, today they can record the behaviour of animals constantly.

The solar operated miniature senders will send their data to the international space station, from where they flow into the online data bank named Movebank. It stores the precise movement profiles of the animals as well as information about the environment conditions. Because the senders measure among other things temperature, ozone and CO2 content of the air or temperature and salt content of the water.

Scientists around the world can this way examine, exchange and analyse data. The knowledge is to help them for example understand how sicknesses spread, which are transmitted by animals, how climate changes effect the flight of migratory birds – and which other animal species except goats react to natural disasters and above all: how reliable they do it.

A further study is still published before Icarus starts: This time the MPI researchers have investigated farm animals in a region troubled by earthquakes in North Italy. Before the publication Wikelsky is not allowed to tell anything about the results. Only so much: "They are exiting."

See Why can goats predict earthquakes?