22.010 Flash of lightning triggers nuclear reactions, where positrons are produced

Der Standard
How antimatter is formed in quite normal thunderstorms, 27.11.2017
derstandard.at, Flash of lightning triggers nuclear reactions, where positrons are produced

How antimatter is formed in quite normal thunderstorms

In thunderstorms gamma radiation is produced at once in multiple ways, as a Japanese research team has now proven.

The assumption is not quite new. Alone, up to now the proof was missing. Six years ago the gamma ray telescope Fermi reported, which actually looks out into the distances of the universe for the relevant sources (and recently played an important supporting role with the spectacular neutron star collision with gamma lightning), a surprising gamma ray surplus quite nearby: namely above large thunderstorm clouds on earth.

The energy of this radiation lay exactly with that value, which originates with the reaction of positrons with matter, namely 0.511 mega electron volt. Somehow antimatter must therefore have been formed in the thunderstorm.

That a flash of lightning releases great amounts of energy is quite well documented: The intensity of current can reach several ten thousand ampere, as a result of which the surrounding air is heated up to 30,000 degree Celsius in fractions of seconds. It expands for that reason explosion like and lets it thunder. But can flashes of lightning really also produce gamma rays and antimatter, as Fermi’s data suggested 2011?

To clarify this question, Teruaki Enoto (University Kyoto) with colleagues set a trap for flashes of lightning near the nuclear power station Niigata in Japan: They built up four highly sensible gamma ray detectors and waited until a thunderstorm came down nearby.

That happened in February this year, and the event really produced the first concrete proof for the assumptions. As Enoto and his team write in the specialist journal "Nature", a flash of lightning, which came down nearby, released for 200 milliseconds gamma rays. After that follows a weaker gamma ray follow-up glow as well as a phase lasting not completely one minute, while energy of 0.511 mega electron volt was released from the gammy radiation.

Particular attention the physicists paid to the second and third phase, which were not completely trivial. According to the analyses it namely came to the second short thrust of gamma rays through a nuclear reaction of the air nitrogen. A neutron was knocked out of the atomic nucleus of the nitrogen, and the short lived isotope nitrogen 13 was formed. The knocked out neutrons collided with the further gas atoms in the air and produced further gamma radiation. 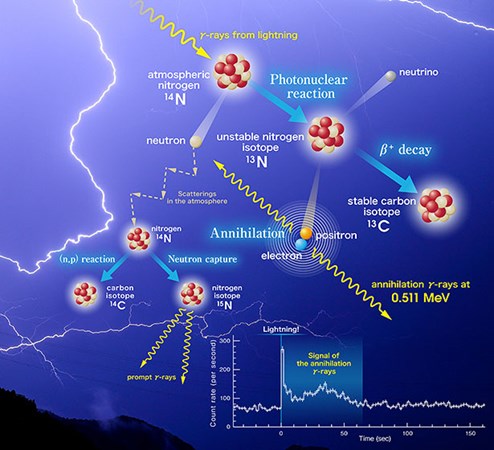 What really happens with a flash of lightning: Through the massive energy a neutron is knocked out of the atomic nucleus of nitrogen. The short-lived isotope N 13 is formed, which decays to carbon 13. Then antimatter in form of positrons is produced.

As particularly exciting phase three proved to be: With the decay of the instable nitrogen 13 isotope to carbon, a proton of the atomic nucleus changes through the beta decay into a neutron. On that occasion, next to a neutrino, also the antimatter equivalent of the electron is released: a positron. And as soon as this gets into contact with electrons, both particles extinguish each other. Through the annihilation gamma radiation is formed.

But the analyses of the Japanese physicists also still supplied a by-product: an up to now unknown source of isotopes like nitrogen 15, carbon 13 and carbon 14. Also their existence we do not only owe – like that of gamma radiation - to cosmic radiation: They likewise originate in thunderstorms.