06.012 Cave of gigantic dimensions discovered on the moon

It is now 45 years ago that for the last time a man has stepped on the surface of the moon. But since then the earth satellite emerges again more often in the future plans of some space travelling nations – among others as intermediate station on the way to Mars or as possible lucrative source of raw materials.

On that occasion it is though essential to overcome some obstacles: Particularly the cosmic radiation, solar particle bombardments and the strong temperature variations probably cause trouble for potential moon colonial settlers. With the help of the Japanese moon probe Selene Japanese scientists have now discovered a cave under the surface of the moon, which could provide protection to astronauts against these adversities of the cosmos. 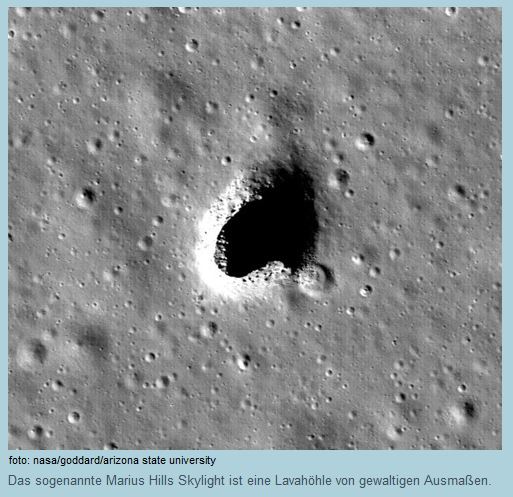 The so-called Marius Hills Skylight is a lava cave of gigantic dimensions.

With the 50 kilometres long and 100 metres wide cavity system it is probably about a 3.5 billion years old former lava tunnel according to the opinion of astronomers, the Japanese space agency Jaxa announced. That such underground tunnels exist on the moon, was already clear for a long time to researchers. But now the scientist succeeded to register their dimensions with radar data, as Jaxa researcher Junichi Haruyama explained.

The gigantic cavity in the so-called Marius Hills Group would provide enough space for an extensive moon station to protect the astronauts against serious temperature variations and the dangerous radiation on the moon surface. The details of their measurements were published this week in the specialist journal "Geophysical Research Letters".

Theoretically whole cities could find space in lave caves of the moon.

Only in June Japan announced its ambitious project wanting to send an astronaut on the moon by 2030. Thus a Japanese astronaut would for the first time be used outside the international space station.

2025 first Japanese space travellers are to support a mission of the US space agency Nasa for the erection of a space station in the orbit of the moon. The mission serves as interim step for a long time mission of Nasa, which works flat out to send an astronaut to Mars as from the 2030s.