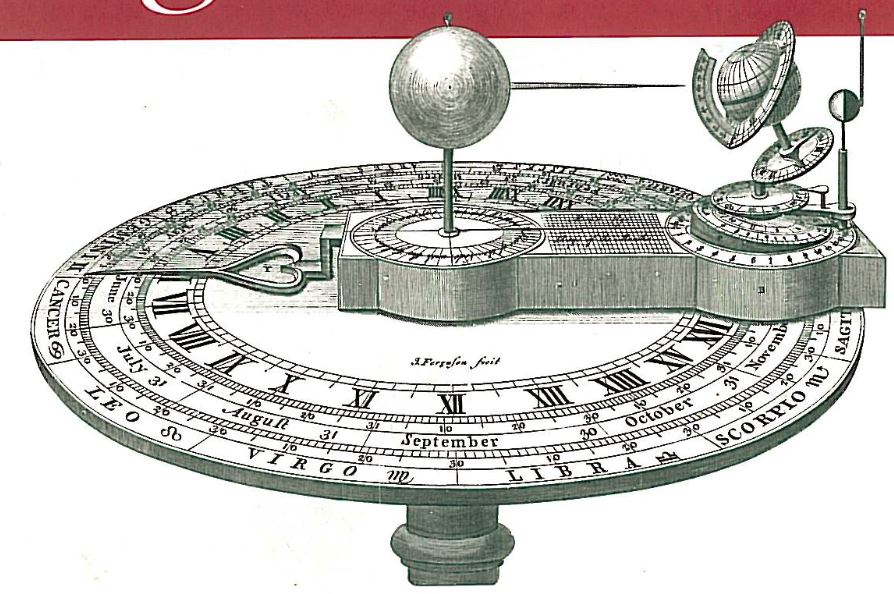 The illustration on the cover of this book shows an astronomical model, a »Four Wheel’d Orrery«. In the 18th century, in the age of enlightenment, the interest grew in England in nature philosophy and astronomy. Newton had laid the foundations 1687 with his work »Philosophia naturalis principia mathematica« for a mathematical scientific understanding of the movement of celestial bodies. For the illustration of the Copernican, heliocentric world view one used – for example at lectures before the Royal Society – highly complicated mechanical models, which meticulously detailed depicted the rotation of the planets around their axis, the rotation of the moons around the planets and the rotation of the planets around the sun. These models of the solar system are generally called Orreries, since the first of this kind in England were produced for the 4th Earl of Orrery – Orrery is an earldom in Ireland. In view of handiness and clarity the proportions of the sun to the planets as well as the diameters of the celestial bodies to those of the orbits did not correspond to the true astronomical conditions.

Also James Ferguson, a Scottish autodidact, constructed different Orreries – the first with self-carved wooden cogs – as illustrating objects for his astronomical lectures, in which he constantly perfected the constructions.

In his biography he describes a »New Four Wheel’d Orrery«, a beautiful, small, simple model for the illustration of the rotation of the earth and the moon around the sun. This »simple« model deliberately does without the earth rotation, but showed the rotation and the phases of the moon, as well as the change of the seasons. The depicted Orrery is probably about this model, which Ferguson presented 1747 at the March meeting of the Royal Society »with great clearness and to the satisfaction of the gentlemen present«. It is assumed that he wanted to let this Orrery being built in multiple copies to improve his meagre incomes, since he – contrary to his normal habit – did not described the mechanical gear system in detail in his publication.

The illustration shows the position of the earth in June at the time of summer solstice. The pointer appropriately stands on the month of June; the sun stands thus in the sign of the zodiac Gemini (the Twins), as is seen at the outermost ring. The earth globe is surrounded by a horizon circle valid for England, on which a meridian scale is put up, at which one can check the height of the sun position with the help of a rod coming from the sun. When one moves the swing arm with the earth globe around the sun, then the moon wanders around the earth at the same time. With it the inclination of the moon course against the ecliptic and its relative time wise change is lifelike taken into account.

When one turns the earth a quarter of a year further, so that the pointer is directed to the front on the month of September (sign of the zodiac Virgo, virgin), then the earth axis must keep its orientation in space unchanged with this movement. This is achieved, as one knows from other constructions, through three cogs of the same size arranged in the swing arm next to each other, of which the inner is fixed on the sun axis. The second, middle cog unwinds on this fixed cog with the swing movement and turns the third outer cog, on which the globe is mounted, contra rotating as a result, so that the orientation of the earth axis does not change. In this way the change of the sun position in the course of the seasons gets impressively portrayed.

It is though hardly imaginable that the additional movement of the moon and the change of inclination of its course could have been managed with only one further cog. The &#187Four Wheel’d« probably referred to the combination of a thicker middle cog with long teeth, which simultaneously drove three cogs, mounted on the outer axis, independent of each other with different number of teeth. As a result forward and backward running movements with regard to the orientation of the earth axis got realized, as Ferguson described this with a different model. Further details can be taken from the excellent book of Henry C. King Geared to the Stars (University of Toronto Press 1978).

Pam Spremulli has drawn up the design of the series and the cover of this book. She has used an engraving from the Radio Times Hulton Picture Library from the 18th century with it. For the book binding the special binding »Freier Rücken« was used. The colophon was written by Hans Erhard Driesen.